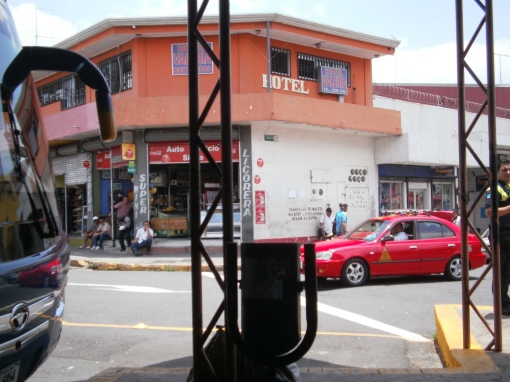 Here’s the beginning of my trip to Jaco, Costa Rica from downtown San Jose. Traveling with my sis who’d never been out of the US, much less into an area that was so incredibly foreign (!!) in terms of cultural differences. We caught a public bus in the Coca Cola station pictured above for less than $10 for a 4-hour round trip. I’d not been to the beach myself since I’d moved here a year ago – primarily because it’s much hotter and more humid at the beach than inland where I live. But my sis needed an ocean ‘fix’ and off we adventured. The public buses are very inexpensive because about half the population, maybe even more, don’t have cars and need to get all over the country. So many users make up for the low prices! Usually the buses that are less expensive don’t have a/c, but they do have very comfortable seating that reclines and large open windows to allow the mountain breezes to intrude on the heat and humidity, thus making the ride – even if it’s hours long – a comfortable one.

Here’s a shot of the buses lined up waiting to depart. As you can see, they are all big and comfortable. The schedules are posted online, but you really need to go to the individual terminal you’ll be using and check those prices as well as the actual location of the terminal beforehand. Things change here and websites and guidebooks are usually behind the eightball with updates…

My sis wanted a native experience, so we went the tico route with this terminal and travel. Much cheaper than taking an ‘executive’ type of bus or shuttle. There are taxi drivers/cabs that will act as guides for tours of the country, and I’ve got a couple of recommendations if you chose to do it that way. They’ll show you the ‘real’ Costa Rica and are usually bilingual to boot, and much less expensive than shuttles or private tours. The guys I know are honest, sincere, and friendly.

The ocean was a compelling reason for this adventure… and here it is. This photo was taken as the sun was going down. The location? Immediately adjacent to the hotel’s backyard. An absolutely and incredible location – Hotel Club Del Mar – 506.643.3194. Notice the surfers! Jaco is known for good waves and a pleasant place to learn to surf. It’s also known for being a party town at night. We weren’t interested in that aspect of the town, but we did wander down the beach to the downtown area and do souvenir shopping that was pretty eye-opening as everything we looked at was really inexpensive.

Hotel Club Del Mar photo taken from the same spot I took the ocean picture above – I just turned around. Fantastic place! So incredibly welcoming, inexpensive for the luxury offered, great food options, full separate bar, huge swimming pool, hotel rooms plus one and two bedroom fully furnished condos available. The staff was very attentive when you wanted them to be. There were lots of kids and people of all ages and from all areas of the globe staying here. Very comfortable, beachy, laid back vibe. 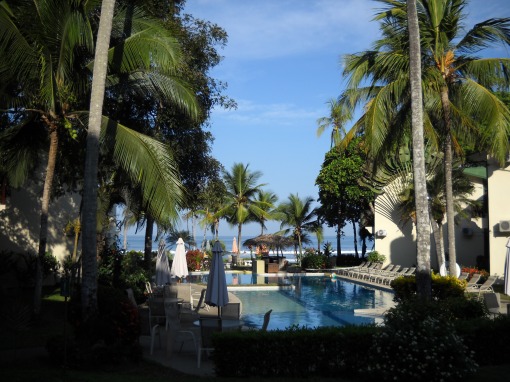 See the ocean beyond the pool? How cool is that??? 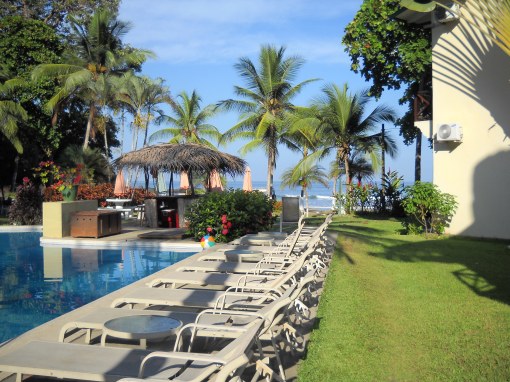 And this is the view from the restaurant.

If you’re looking for a great walking beach, a fantastic hotel, a quaint downtown area, and peace and quiet (during the day at least), this is the place to be. It’s the closest beach to San Jose a 1.5-2 hour drive.

I’ve followed up this trip with my sis with a day trip alone, walking along the beach, sitting and watching the surfers, and wandering the little town in discovery of a different type of lifestyle. Have to tell ya that during each trip I think I lost 2 pounds just sweating – but the heat is like a cast iron stove; it warms your insides and made me feel like a rainy day in Portland, OR – I simply had to sit back, enjoy the opportunity to do nothing, and smile for hours at the fact that I was in paradise enjoying the bounty of nature for very little money. What a life, huh?

This site uses Akismet to reduce spam. Learn how your comment data is processed.